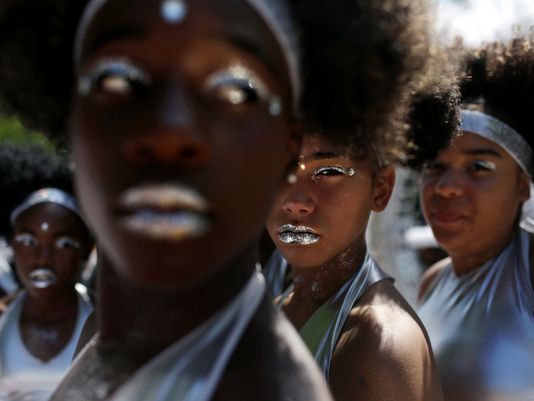 There was a time when being black in America meant you were most likely descended from one or more enslaved Africans who had survived the trans-Atlantic slave trade. However, as the number of African and Caribbean blacks immigrating to the USA has increased, so have the chances that someone who identifies as black or African American is a first- or second-generation immigrant.

The influx of foreign-born blacks has energized the debate about what “African American” means today. Does that category include people like the model Iman and the singer Rihanna — born in Somalia and Barbados, respectively — or can only those whose family trees were violently uprooted and replanted on U.S. soil hundreds of years ago claim that designation?

Rihanna worked a pose in a canary Oscar de la Renta two-piece ensemble at the launch of her inclusive beauty line on Sept. 7, 2017 in Brooklyn, NY. (Photo: Brent N. Clarke/Invision/AP)

At the Smithsonian National Museum of African American History and Culture, exhibits are inclusive, representing the wide range of “Americans of African descent affected by the historical American experience,” said Ariana Curtis, the museum’s curator for Latino history and studies. “We understand that the African-American experience in the United States is diverse.”

While many black immigrants embrace the African-American label and culture, not all are quick to jump into a melting pot that might dilute their distinct cultures.

Eliza Thompson arrived in the USA as a child and identifies as Ghanaian. She prefers to think of the country as a salad bowl rather than a melting pot. “The lettuce is still the lettuce,” Thompson says. “Mixed together, the lettuce, carrots and tomatoes all work. In the melting pot, you lose your identity.”

There can also be a reluctance to identify as African American because of negative stereotypes of U.S.-born blacks, says Wayne Fairweather, a Jamaican-American who emigrated as a teen. In a country run by people of color, Fairweather says, there were no negative depictions of black citizens manufactured by those in power. So, when he was exposed to stereotypes of U.S.-born blacks, he tended to believe them.

“When you grow up in another country, you think the streets in America are literally paved in gold,” Fairweather says. “You think that all you have to do is work hard and that African Americans haven’t succeeded because they are lazy.”

However, many foreign-born blacks come to recognize the effects of institutional racism, he says. “People joke about Jamaicans having multiple jobs, but after working and working and not getting ahead, you start to realize what racism is and how it affects you,” he says.

Joanne Hyppolite, a curator at the Smithsonian museum who was born in Haiti, says: “Black immigrants come here, and they’re introduced to American race relations. You begin to see a shift in perspective in their own understanding of how race works in America.”

Hyppolite says that despite minor misunderstandings, there has always been a kinship between black immigrants and descendants of the enslaved that has helped shape America.

“Whether that’s Stokely Carmichael (born in Trinidad), who coined the term ‘Black Power’ during the 1960s civil rights movement, or Malcolm X, whose mother emigrated from Grenada,” Hyppolite says, “they’re all defined as African American.”

That tradition of collaboration continues as the Congressional Black Caucus lobbies to secure citizenship for Haitian evacuees, and the NAACP opposes changes to the Deferred Action for Childhood Arrivals program.

“The bonds of cooperation are still there,” says Kevin J.A. Thomas, associate professor of sociology, demography and African studies at Penn State. “If anything is going to happen, it will make bonds stronger. We are here together. Live together as brothers or perish as fools.”